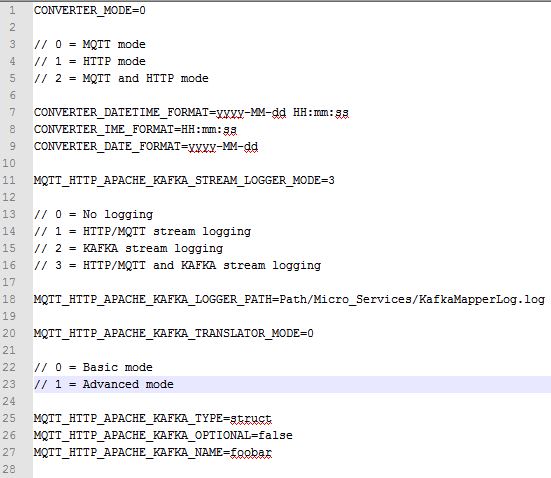 The following application was created by a project with purpose to connect MQTT parts with the Kafka Broker.

The goal was to implement an application that is capable of transforming incoming MQTT topics to a format that is compliant with Kafka, as the original data was streamed with MQTT, whereas the subscriber was only able to receive data sent in Kafka JSON format.

The MQTT-to-Kafka mapper is based on a spring boot java microservice architecture. Therefore, one of the key features of the application is the low consumption of resources, as the framework allows for the efficient distribution and usage of resources in general.

ore the architecture includes multiple packages, such as the Java MQTT Paho client, Apache Kafka client, the JSON libraries JSON-Simple and the Apache Maven package for Build, Deployment, and Testing.

Another key feature provided by this application is the mapping by objects. This feature allows the application to transmit the topic from its very origin (MQTT) up to its destination (Kafka).

The next feature is the automatic detection of optional values inside the input stream. This particularity allows the application to determine these values and redirects it to the output stream. It is also possible to set a default flag for the output elements in the config file.

It is also possible to pass MQTT Topics to the same Kafka Topics.

Lastly, the application also supports simultaneous, the conversion of multiple and single MQTT Topics to Kafka Topics at once.

Architecture and functional principles of the MQTT-to-Kafka mapper

Before starting the application, you must ensure that both the MQTT server and the corresponding Kafka server are running.

At first, a JSON string is being sent via MQTT (HTTP is possible as well). This string is being directed into the MQTT-to-Kafka mapper, where the string is then being transformed into a Kafka-compliant format, which is predefined.

The application then executes the mapping by objects. For this process, a configuration file had been created which defines all rules necessary for the execution of this mapping.  As soon as the mapping is done, the string is transmitted to the Kafka broker and can then be used for further business processes.

The application is currently stable and the actual status is stable (Version 1.0.1).

The following table explains you, the individual functions of the configuration file.

If you want you can support my work. The corresponding PayPal link will follow shortly.

You can find the license agreement here.

Please, contact me if you find a bug or you need help!